Last updated: 16 Nov 2014 – the Clash of Clans hacks may not work if you are reading this post months after because updates might be released to solve hacking issues.

The technology in today’s times brings us a leap when it comes to gaming as we could access it even through our mobile phones. If you are new to gaming, you would most probably get confused as to what to play. With millions of games to choose from, what are the games that are good to play? Before downloading a game, you have to consider some things first which are simply; first your phone’s capacity, next is the game’s reviews, and lastly the thriving community. Clash of Clans is a strategy video game developed and published by Supercell on August 2, 2012 on the iOS platform. Due to its popularity, the game was later released also for Android users on October 7, 2013. With regards to the game’s community, it has more than 8 million players, making it a Massive Multiplayer Online game. With the addition of it being a strategic game, you definitely be hooked on Clash of Clans.

The Endless Search for the Real Clash of Clans Hacks

With all of the tactics, you’ll be in for a challenge because you will be competing with other players. Although despite the game being a free-to-play model system, the donators are given an advantage because they are allowed to purchase namely everything as long as they have the exact amount of gems needed, as micro-transactions are available in the game. So if you do not purchase gems, then what would happen is that you would have a slower progress.

Luckily, there are hacks that are out in the internet that are available to download. However, you have to take a look as to how credible they are because most of them are just some forms of spyware, malware, or any type of virus that could potentially ruin your operating system.

Disclaimer: With this cheat and hack guide, you will have to use it at your own risk and PhoneResolve does not hold any responsibility should anything happens to your phone or account.

Now in order to excel in the game, you have to get unlimited gold to purchase stuff that you want, unlimited elixir to train those fighters that need such currency, and of course unlimited gems to purchase those premium features in the game. Most versions of the hacks need to be rooted on Android or Jaibreaked on iOS in order to enable you to alter the restrictions made in the game but with that, there are also risks because the primary one would be losing the warranty of your phone. Also, another risk of cheating is that your account could get banned from the game. 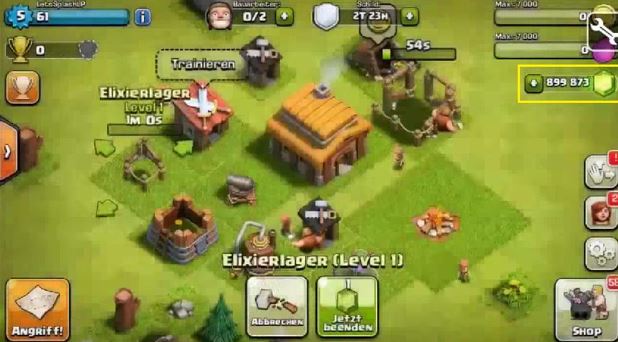 Step-by-step guide to get Clash of Clans Hack:

From here on, building the type of strategy that you want would be a piece of cake. The need for you to farm by raiding different castles and looting resources would not be necessary. You could now destroy those kingdoms of your friends. Have fun and play hard!

Important! We’ve not tested the Clash of Clans hack ourselves, so if something goes wrong with your phone or tablets, we would not be able to help unfortunately.