After playing through Pokemon Light Platinum, I found myself looking for other homebrew Pokemon games to play. This time around, I stumbled upon another gem in the form of Pokemon Dark Rising. It is essentially a hack of Pokemon Fire Red with a different story.

Similar to Light Platinum it has Pokemon from future generations (e.g. Generation 4 and 5). It features an extremely engaging and extensive story that is guaranteed to draw you in for hours. Additionally, it’s also the first game in a continuing series. You’ll have two more games to enjoy playing once you finish Dark Rising. 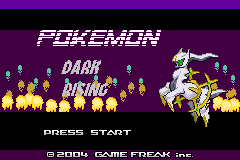 Pokemon Dark Rising started out as a project by DarkRisingGirl. It was basically her attempt at making a non-canon Pokemon game that featured a new adventure that players won’t find in the main series. The game features 386 Pokemon covering the first three generations. What’s interesting to note is the fact that the game is technically an unofficial remake of a remake (FireRed and LeafGreen being the first remakes in the series).

Setting it up on GBA4iOS

Similar to Pokemon Light Platinum, setting up Pokemon Dark Rising to work on an emulator, especially one like GBA4iOS, is extremely easy. All that’s needed is to search for the game using the built-in search function on the app (if you’re using GBA4iOS 2.0). In the event that this isn’t available, you can always use the Safari browser on your iPhone or iPad to search for the rom. Once you’ve downloaded it, you can opt to open it using GBA4iOS or any other GBA emulator that you happen to be using. For the Android users, check out the emulators for Android here.

To Cheat or Not to Cheat

You can also use cheats on ROM hacks like Pokemon Dark Rising in the same way that the original games supported them. Don’t get me wrong, playing through Dark Rising without cheats is still enjoyable. However, enabling cheats actually makes the game more interesting. It also takes away the tedious grinding that is the hallmark of most ROM hacks.

In the case of Pokemon Dark Rising, you can opt to go at the game with or without cheats and it won’t affect how you enjoy it. If you do want to use cheat codes, you might want to continue reading further about some unique issues that you might encounter.

There are two types of codes that you can use for Pokemon Dark Rising: Code Breaker and Action Replay/Game Shark. These codes were in turn used for Pokemon FireRed. Generally, the codes you’ll find online for use with these cheat engines aren’t as comprehensive as what you’ll find for other games in the series (Pokemon Ruby and Sapphire come to mind). Due to this, you’ll find some cheats from Action Replay/GameShark that work and some that won’t.

The same can be said for Code Breaker. As a matter of fact, you’ll generally find more codes that won’t work due to how complicated the original cheat engine was (some codes required pressing specific buttons on the GBA to work). The cheats that we’ll be detailing are the ones that I found (and have proven) to work best on GBA emulators.

The RNG Kill Code is similar to a master code since it is required for some specific (not all) codes to work. It’s best to have this enabled all the time. 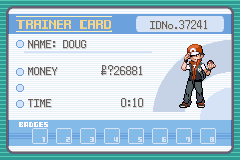 Now, one of the first cheats you’ll need when playing Pokemon Dark Rising is Unlimited Money. Once this is activated you shouldn’t have to worry about buying any equipment or items anymore. Don’t worry if you see a ‘?’ after the currency sign for your money.

The reason for this is that for some reason, the game actually doesn’t know how to count money when it’s more than 1000000. Once you buy something (2×99 Poke Balls) from the Poke Mart you’ll then see your money will adjust accordingly. There are only two Code Breaker codes that we’ll be using for this game and this is the second of them (the first being the RNG Kill Code).

This code will enable you to buy any item from the Poke Mart for only $1. Even if you don’t use the Unlimited Money code, you’ll still get to buy items like Master Balls and Rare Candies at only $1 each. If you want to buy only one specific item you’ll also have to indicate its code (these specific item codes can be entered separately). Not using item-specific codes will still turn the price of all items sold at the Poke Mart you enter to $1. 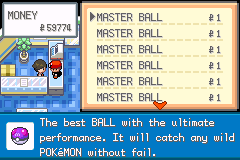 The problem with the codes mentioned above is that you’ll need to have access to a Poke Mart to get the most out of them. Progressing through Pokemon Dark Rising the normal way requires you to grind a bit (until your starter Pokemon reaches Level 13-14) before you can access your first Poke Mart. The Walk-Through-Walls Code will enable you to reach Tiki Village in no time at all. Then, after you’ve bought the two items above you can return to Fells Town to continue the story. Before that though you’ll need these guys help….

Use these codes to encounter a couple of the best Pokemon in the game. Avoid a fight with these when you’re going up against them. Although their levels are lower than your own starter, their attacks are actually quite powerful. Just use the Master Balls to catch them right away and you should be set. So without further ado, here are the codes for these Pokemon: 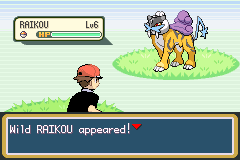 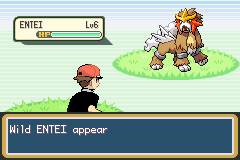 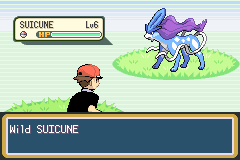 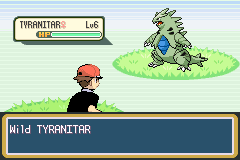 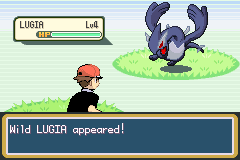 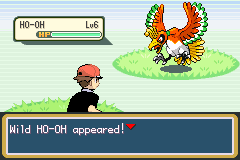 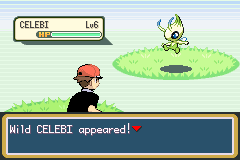 Exercise caution and make sure that you enable only one of these codes at a time. Enabling two at once will more than likely result in your emulator crashing and you having to go back to square one.

In order to make room for some of the Pokemon from the fourth and fifth generation, some of the Pokemon from the first (Mew Two) and third (Legendary Pokemon like Deoxys) were removed. The Pokemon that I mentioned here though, should be more than enough to take on any other Legendary that you might encounter. Also take note that Code Breaker and AR/GS codes should work flawlessly together on an emulator. If for some reason your game crashes, just disable the Code Breaker (or whatever your preference may be).

Finally, here’s my initial roster to start my adventure in Pokemon Dark Rising: 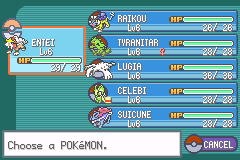 Have you played this game yet? Care to share your Pokemon line-up? If yes, then hit up the comments section right now!