Hardest Game Ever 2 Cheats and Tips For All Stages

The Hardest Game Ever 2 is perhaps one of the annoying and frustrating games on Android that I’ve ever played. If you’re planning to download this game on your phone, make sure to prepare yourself for some major rage quitting. The whole game is composed of mini-games or stages that require some accurate taps from you to complete. Also, most if not all of the stages just take about a minute or two to finish. As you progress, the stages become more challenging that they become near impossible to finish at times. There are no cheats for the game unfortunately but we have played through the entire game and here are the tips and walkthrough for the Hardest Game Ever 2. 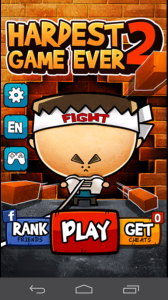 Stage 1: For the first stage, make sure to tickle the foot as many times as possible to get an S rating. You don’t have to worry about penalties as there are none. Seriously, you’ll probably get an S on this stage even with your eyes closed.

Stage 2: The next stage, Rock Paper Scissors rewards you with points if you chose the winning hand. You’re given 4 points if you choose right before the 500ms mark. Things get challenging on this stage but it’s still manageable compared to the final two games for the Easy Level.

Stage 3: Silly Sleep Boy is probably the funniest and easiest stage in the game. Press the button opposite of the direction the boy’s head is tilting. You’ll only need to ensure that the head doesn’t tilt completely to get an S rating. Best thing to do is to mash the button to keep the boy’s head from falling.

Stage 4: Morning Toilet Rush is where it starts to get a little tricky. If you just want to beat the game (get an E rating) then you have to make sure that you stop at the exact moment you reach the toilet. Remember to not tap too fast as you’ll most likely end up falling down because of one too many steps.

Stage 5: Ice Cream Mania requires a lot of hand-eye coordination. In order to get an E-rating, make sure to use three fingers. It might feel unnatural at first but trust me, you’re going to get used to it (especially since you’re not going to suck for the first couple of tries). Another thing to remember is to not wait for the ice cream to fall since doing so will also take time. Out of all the stages on Easy, this is arguably the one that requires patience. 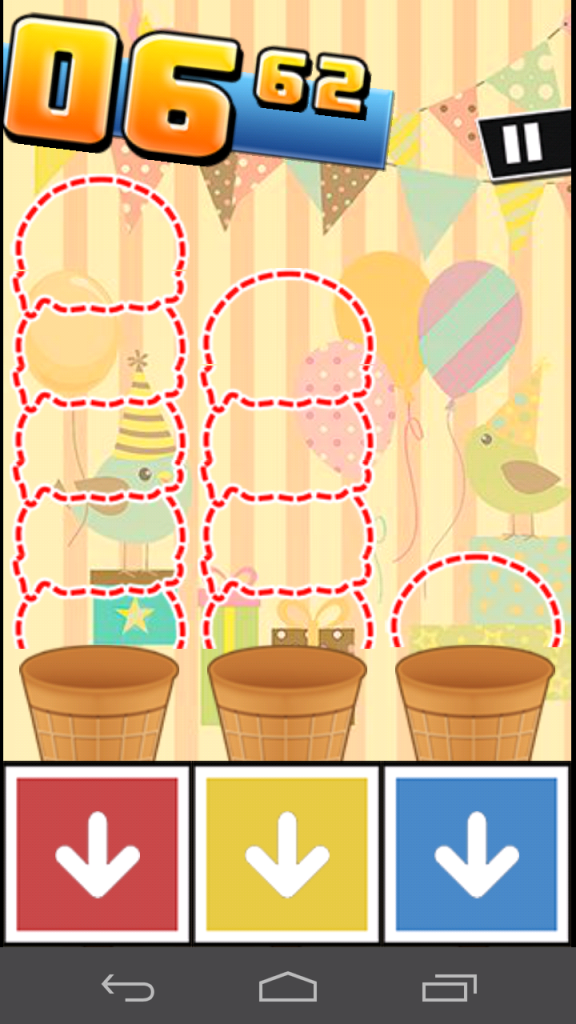 Stage 6: Slap A Lot is the last Easy stage and it is anything but easy. The only thing you’ll need to remember when playing this stage is to never count the number of slaps/taps. Not only is this pointless but it’s also near impossible. A better strategy to determine if you’ve already hit 37 taps/slaps is to actually to take note of your time. In my case, I found that the timer always stopped at 5.20 seconds mark whenever I intentionally tapped 38 times. The next time I played the game I made sure to stop tapping just before this mark and was able to get an A-rating.

Stage 7: Things get slightly complicated with the first Normal stage, Cowboy Bar Shooter. This is another mini-game that requires a lot of precise hand-eye coordination and concentration. The objective is to shoot the glasses as fast as possible by tapping on three buttons. The same technique for Ice Cream Mania can be applied here.

Stage 8: In Photo Show Girls it’s all about tapping the buttons as fast as you can. Ideally, you want to have around 10 taps every photo-op. Make sure to use the ring, middle, and index fingers of both your hands for this game. This means that you’ll have to position your phone vertically on a flat surface to be able to pull this off. 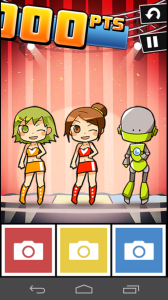 Stage 9: Bomb Panic Squad requires you to stop bombs from blowing up once the countdown timer falls under the 1 second mark. In order to get an S-rating, you’ll need to get an average time of less than .20 seconds. More than dexterity, you’ll need to have great timing to be able to get past this game.

Stage 10: For Crazy Jackpot Rush, you’ll need presence of mind and precision tapping to be able to get an S-rating. Don’t mind the color of the Jackpot wheels and instead focus on the instruction. This might take some time to get used to but once you’re able to train your mind to disregard the colors then it’s going to be quite easy to get an S-rating or at the very least pass.

Stage 11: The Oh, I Love Maths stage will make you initially hate math. Once you get an S-rating though, you’ll realize how good at the subject you’ve become. This mini-game tests your memory and reaction time. Just a reminder when playing this: make sure that you’re not sleepy or pre-occupied. Memory and concentration is key in breezing through this stage (aside from tapping the answer as fast as you can).

Stage 12: Finally, you get to the last Normal stage which is called Three Little Cook. The game is similar to Bomb Panic Squad but will require you to be a little more precise in timing your taps. If you catch the eggs while they’re still a ways off from the blue line, you won’t get the maximum number of points. The objective is to get at least 150 points (15 perfect 10s) so you’ll need to make sure you get at least 8 to 10 points every time you catch eggs. 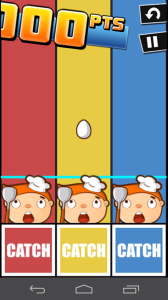 Stage 13: Now this is when things are going to get a little testy for you. Guess Who Am I requires that you look for patterns in the order that people will pop up. One good way to do this is by setting your sights on the part of their body that distinguishes them: their hair.

Stage 14: Dog Vs Bone will require some nifty phone maneuvering on your end. People think that balancing the bone in the middle of the dog’s head is the way to go. However, that isn’t necessarily the case. You might want to try some controlled swinging of your phone instead. The swaying motion this generates will usually result in you having a better time and an S-rating.

Stage 15: In Hop Hop Hop, your primary objective is to make sure that you avoid falling in the water at all costs. One thing about this stage is that there are patterns that can be followed but you’ll need to be really observant (and fail a couple of times before you can find them).

Stage 16: Super Chin Up Hero is a mini-game that requires some serious button mashing and weird but doable finger positioning. For your left hand, position your middle and index fingers in a way that the former will be sticking out more than the latter. As for the right hand, it’s going to be the index finger instead of the middle finger sticking out. You’ll then have to press the two fingers that stick out together and use this to quickly mash the two buttons.

Stage 17: Pluck A Nose Hair might sound and look funny but that’s probably the last thing you’ll be thinking when you’re actually playing it. The first thing you’ll need to remember when playing is that you should always avoid getting a zero. Don’t freak out if the red bar is constantly changing in size, just make sure to time your tap when the cursor is directly below it.

Stage 18: For Same Card Poker, you’ll need to tap the buttons of similar cards when they are dealt. It’s similar to Photo Show Girls but this time you’ll only need to press on the similar buttons once every turn. Again, if you want best results you’ll need to use three fingers here. Once you’re done with this, it’s then time for your hardest set of challenges yet.

Stage 20: It only gets interesting as you get to High Dice Master. Always take note of the sixes and fives for single and multiple die rolls. It’s best to start out slow and then build up your rhythm as you play. Like with most stages in the Insane Level, don’t expect to automatically get an S-rating here.

Stage 21: If you love fractions then you’ll like the 21st Stage in the Insane Level: I Hate Fractions. If anything this stage is similar to an elementary math class where kids are shown fractions and asked which are bigger. Just take note though that if the fraction’s numerator is one number less than it’s denominator, it’s bound to be the bigger number

Stage 22: The best strategy for Comon, Who Farted!? is to make the most of the easier to follow patterns at the start. Make sure you get lots of perfects and use this initial part of the mini-game to build up a rhythm of your own. The key to getting a passing rating on this stage is your rhythm and memorization.

Stage 23: In Super Memory Bus (which is the penultimate stage), getting a passing rating is all about familiarizing yourself with the three types of students who’ll ride the bus. Like Ice Cream Mania, you’ll need to use two to three fingers (depending on the students who show up) to be effective. As with most stages in the Insane Level, you’ll need to make sure you get an advantage early on because later levels are going to take up a lot of your time.

Stage 24: Finally, we’re now at the decidedly anticlimactic stage of the Hardest Game Ever 2’s Original Pack. The first part of Stickman Cliff Jumper has you mashing the Run button as fast as you can to provide power and momentum for the Stickman. At a certain point, you’ll be able to tap the grayed-out Jump button. When this happens make sure to tap it as quickly as you can to ensure the Stickman jumps further. The timing might take some practice but once you get it, you’ll be bound to get A or S ratings while you’re blindfolded.

What Else Should You Know? 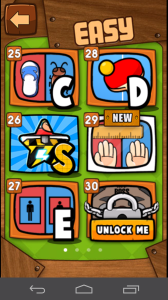 And that’s it for our the Hardest Game Ever 2 all stages cheats and tips. If you’ve gotten all S-Ratings for the Original Pack, go ahead and try the Extreme Pack. As its name implies, this additional content has more extreme challenges that’s sure to keep you up at night. I’ve also realized that unlimited restarts that’s activated when you buy the game ($1) is really convenient and a good deterrent for rage quitting. One thing you’ll also need to keep in mind is that the games/stages are meant to be hard. The only way for you to really get past any of them is to be patient and familiarize yourself with the patterns/mechanics of each game.