HTC One M8 Specs and Price

If you are one of those fans of HTC One M8, following review of HTC One M8 Specs and Price will be very useful information that you cannot miss before you can hand on this latest handset by HTC. The next handset from this this Taiwan manufacturer will offer you with the specification that comes with higher and much better performance than the previous handset. This version is also known as the successor of HTC One that has been amazing with its feature and specs. So, many customers will expect this version to get much better performance than its former version.

The first thing that you can find from the review of HTC One M8 is that it comes with beautiful design of metal as its cover. The cover that made of metal will be one of those benefits you can have from this smartphone that will add such an expensive feeling just like what you can have from the iPhone. However, this time you can have such feeling on your Android device since Samsung fail to give you this kind of feeling with their plastic cover. With metal covers, HTC one M8 will give you three different color choices of amber gold, arctic silver, and metal grey. 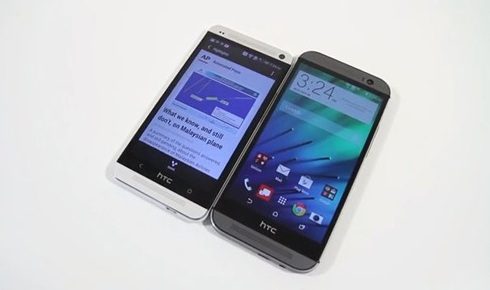 Other than beautiful appearance that shown by HTC One M8, you will also find that it will offer you such an amazing performance inside. The first special thing that you are going to find from this smartphone is its display screen. It has 5-inch screen that support full HD display. Moreover, the display screen is supported with 1920 x 1080 pixel resolution that will definitely give it a great quality for its screen since it has 441 ppi for its pixel density. For the best result, you will also find it has Super LCD technology with IPS panel.

Other than its display screen, this review of HTC One M8 Specs and Price will also give you further description of its CPU and RAM.Powered by quad-core Qualcomm 801 processor, the same processor that powered Galaxy S5, this device will give you the best performance with its clock speed at 2.3GHz. HTC One M8 is also reinforced with 2GB RAM that will be great combination with its processor to produce an amazing performance.

The last thing that you cannot miss from this smartphone is on its camera and storage. There will be two camera of primary and secondary camera that come with different quality for each part. The primary camera is supported by 4-ultrapixel rear camera. This is a higher quality of camera you can find in such Android handset. Furthermore, such camera with this quality will give you depth-sensing camera that will capture special awareness and record the information into metadata from each picture taken. For the secondary camera that located on the front part, you will find a 5-megapixel that comes with better lens which will give you clearer selfie photo shot. For the storage, this device will provide you with 16GB internal storage with memory card slot space given.

For that HTC One M8, you will find different price available. The SIM-free version will be available for around £530. Other than this deal, you can also find the best deal with those providers that will offer you great price for monthly deal. However, you will find that those deals offered for this handset is worth it since they don’t give you any too expensive price that quite irrational for the handset. Instead, you will have the right price for HTC One M8 Specs and Price.