John GBA vs My Boy! The Best GBA App for Android

The Gameboy Advance (shortened to GBA) is not only one of the best selling handheld gaming consoles ever it also had an expansive catalog of games. Now you can play any GBA games you want on your phone. In this post we will compare the two of the best GBA apps for Android.

From the early titles of the Pokemon series to Fire Emblem, it seemed that there was no end to number of amazing games that were released for this platform. Even up to now, some of these games are still being played. I mean, just a couple of months ago the whole internet was in a frenzy playing Pokemon Red on Twitch.tv.

You probably have one GBA game that you’ve been meaning to play but can’t because you don’t have the console anymore. Well, if you still have the cart then you might want to download a GBA emulator. There are a number of these available for your PC as well as for smart phones (iOS and Android). For now, we’ll be comparing two of the best rated GBA emulators available for Android devices.

There are versions of the John GBA emulator available on the Google Play Store. The first is the lite version (which we’ve used for this review), and the second is the paid version which costs around $1.

As indicated in its Play Store page, this emulator makes use of the Original GBA engine and supports raw cheats as well as those through GameShark and CodeBreaker. Like most emulators made for touch screens, John GBA has a virtual on-screen keypad which can be customized (placement and size adjustment).

The John GBA emulator only supports GBA games. This means that you won’t be able to load roms of your Gameboy and Gameboy Color carts.

There’s nothing fancy with the John GBA emulator’s user interface. Once the app is installed it will automatically search for ROMs on your device’s internal and external storage. This auto-search can be canceled though and the player can opt to go directly to the ROM’s location on his phone or SD card.

Players who prefer to use real controllers would also be happy to find that this emulator supports the Wiimote, MOGA, Gametel, or any other Bluetooth controller. The Google Play Store page also indicates that the emulator has zipped file support. Additionally, the emulator will work on any Android 2.3 (or higher) device. The app is pretty stable and it also gets updates on a regular basis.

This emulator supports link cable emulation through local wifi and bluetooth. Additionally, Fast Emulator (the developer) has officially added support for devices supporting x86 (Intel) processors. When using the free version, fast forward speed is only limited to normal and x2. Rendering is done via an OpenGL backend for devices that have a capable GPU. Older devices without a GPU will default to normal rendering. 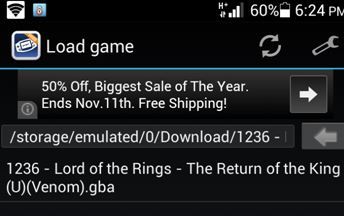 The My Boy! GBA emulator will only support GBA ROMS/games. If players wish to play their Gameboy or Gameboy Color games, they can download the separate My OldBoy! emulator (which also happens to be made by the same developer as My Boy!).

This emulator’s main user interface bears some similarities (e.g., features the directory and options button on the main page) with the John GBA emulator. Unlike its competitor, it doesn’t have a search function and the app also doesn’t show a list of detected games on its main page. 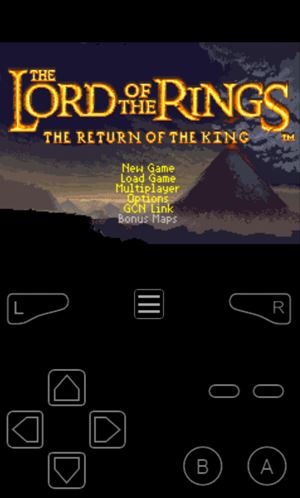 The emulator features support for external controllers such as those made by MOGA (or any other bluetooth gamepad). The app was updated last July 2014 and as of the moment it doesn’t have too many bugs that require for another update.

Which is a better GBA emulator for Anroid?

The John GBA and My Boy! emulators both do a commendable job at emulating GBA games. Players who just want to play their old GBA games might like the John GBA for its easy to use interface but they might find the ads annoying at times. Additionally, even though it says that it has support for zipped files, I still had to extract my own game from its zipped folder for the emulator to recognize it. The search feature can also take some time to finish especially depending on the size of your phone and SD card storage. I also noticed that the emulator doesn’t automatically adjust the orientation from portrait to landscape. You’ll have to go into settings and change the orientation from there.

On the other hand, I found the My Boy! emulator to have better controls. Although it does feature ads, these are only visible on the main page and won’t appear when you’re playing the game. Other than Pokemon, there aren’t many games that make use of link emulation. If you’re a casual player then you should have no problems playing your favorite GBA games using this emulator. Really, the only gripe that I have with the emulator is the price which is to be expected considering how feature-filled it is.

Based on these recommendations, although the John GBA emulator is more affordable, My Boy! gets my vote due to a more responsive button layout and the lack of ads when playing games. Regardless of which one you chose though, know that at the least you’ll be able to go on a trip to memory lane once you play your favorite GBA games on these emulators.