Samsung Galaxy Alpha Specs and Price – Samsung has revealed their next super slim smartphone which is called Galaxy Alpha. The Galaxy Alpha is the first Samsung device that use a fancy metal as its frame. But, unlike the iPhone, the Galaxy Alpha does not feature a full metal casing, and instead retains the perforated plastic rear found on the Samsung Galaxy S5. The Samsung Galaxy Alpha itself, will be focus on both beauty and functionality combining a stunning metal frame and slim, light weight design with the same powerful hardware and features users expect from a flagship Galaxy mobile. This smartphone is expected to launch in the beginning of September. It will come in Charcoal Black, Dazzling White, Frosted Gold, Sleek Silver and Scuba Blue. 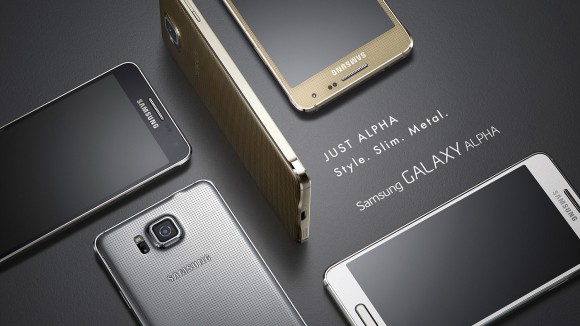 For further information about the specifications and price of the Samsung Galaxy Alpha, let’s check it out below.

For the display, The Samsung Galaxy Alpha comes with a 4.7 inches HD Super AMOLED display screen with a nice resolution of 1280 x 720 pixels. Actually, it makes this smartphone hardly dazzling, because it gives the Galaxy Alpha a pixel density of just 313ppi, lower than the 640 x 1136 iPhone 5S, moreover with Galaxy S5, One M8 and co.

In the power department, The Samsung Galaxy Alpha comes with 2 different types depending on which region you are in you will find either an octa-core (quad 1.8GHz + quad 1.3GHz) or 2.5GHz quad-core chip inside the device. Both models has a 2 GB RAM to handle the multitasking easily without getting a lag. The operating System of this smartphone installed with Android 4.4.4 Kitkat. The Samsung Galaxy Alpha also comes with the TouchWiz user interface and some additional apps and features such as S Health, Quick Connect and Ultra Power Saving Mode.

Galaxy Alpha comes with an internal storage memory of 32 GB. However, the internal memory cannot be increased due to the absence o memory card slot in this smart phone.

Galaxy Alpha comes with a 12MP powerful camera on the rear and a 2.1MP snapper on the front. There is a single LED flash in the rear camera. The camera at rear end also capable of recording video at 4K quality. The front camera is enough to capture a perfect selfie, because it is slightly higher than the camera of other smart phones in its range. Samsung has also included a number of features with the camera on the Galaxy Alpha, including Dual Camera, Autofocus, Touch to focus, Manual focus, Digital image stabilization, Face detection, Smile detection, Exposure compensation, ISO control, White balance presets, Burst mode, Digital zoom, Geo tagging, Beauty Face, High Dynamic Range mode (HDR), Panorama, Scenes, Effects.

The battery inside the smart phone is an 1860mAh battery and removable. It offers the talk time of only 10 hours when in 3G mode.

The Galaxy Alpha boasts super speedy CAT 6 LTE, allowing you to get blisteringly fast 4G speeds (up to 300Mps) on the handset, unortunately most networks are not yet optimized for this. All the basics can also be found including Wi-Fi, Bluetooth 4.0, NFC, GPS and a microUSB port on the base of the handset.

Samsung has yet to announce pricing for the Samsung Galaxy Alpha. But, Mobiles.co.uk, while yet to start taking orders for the phone, has given us our first glimpse at the Galaxy Alpha’s monthly pricing. They will offer the phone on a £40 O2 contract with unlimited minutes, unlimited texts and 1GB data.