Samsung and Apple seems always will be pair of eternal competitors that will always compete each other’s product like you can find in Samsung Galaxy S5 vs Apple iPhone 5S. This is another competition that you will have between those two big companies. If you are also those that interesting in this competition, following discussion will tell you more about the feature that make each of them better in certain feature and how the other will come with less competitive detail. At the end, there might not be conclusion of which one of them that comes as the winner. It will be you as the audience that comes with your own justification based on the following details presented.

The first thing that you will find from Samsung Galaxy S5 vs Apple iPhone 5S is the different on their design. You will soon realize that Galaxy S5 is bigger than iPhone 5S. It seems to be the same different that you can find on some previous versions of Samsung Galaxy S series and iPhone. Different size of those smarpthones is matter for most people. Since the Samsung Galaxy S5 sized bigger, it is rather hard to hold it in only one hand. On the other hand, iPhone 5S seems to always have the size that fit to your hand so that you can easily grab it. Other than the size, you will also find that each of those smartphones is also different. iPhone will give you such a hard and expensive-feeling of its look, while Galaxy S5 will only give you plastic with dimpled rear. However, each of them comes with different benefit. Though it looks luxurious, iPhone 5S give only non-removable rear. On the other hand, Galaxy S5 will allow you to take the battery when it is damaged as you can replace it easily. Galaxy S5 comes also with waterproof design so it will guard its port from water. 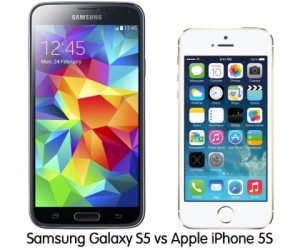 After we talk about what we can see on each smartphone, we will now move to the special feature between Samsung Galaxy S5 vs Apple iPhone 5S. Both of them might have quite similar special features in their latest version. Galaxy S5 with Synaptics Natural ID-based scanner and iPhone 5S with TouchID are two features that make them special. Though they might work quite similar by scanning finger print, they will work quite differently. The 5S scanner sometimes works quite annoying when you don’t know how to use it. You need to learn how to move your finger over the S5 scanner. On the contrary, 5S will work simple and securely as the scanner will work easier than the Galaxy S5 scanner. It will ensure you the security of your iPhone as you can also use it to validate Paypal payment as well.

It seems that you will have more to discuss like the specification of Samsung Galaxy S5 vs Apple iPhone 5S. The first thing that we are going to discuss is the display screen. In this part, they are still quite similar since they bring almost the same quality for their display screen. Galaxy S5 is supported with Super AMOLED, 5.1-inch, with 1080p resolution, while iPhone 5S is equipped with IPS LCD 4-inch with 1536 x 640 resolution that suit the best for the smartphone that come with not very big screen.