When people talk about MOBA’s or multiplayer online battle arena, only one thing comes into their minds and most probably, that would be DOTA. The original Defense of the Ancients was just a custom map for the popular Blizzard strategy expansion game, Warcraft 3: Frozen Throne.

But Dota, as of today, is still very popular and this is because this game is very addicting and maybe because this game requires lots of team play,   resource management and of course, familiarity of the units, spells, and items. These skills are needed to master not only Dota but most MOBA games.

But nowadays, moba gamers have also transitioned from playing the traditional PC’s and laptops to their smartphones which quite frankly is very possible. Today’s top of the line smartphones are undeniably powerful enough to handle processing requirements of mobile MOBA games. I, as an avid gamer, also love to play games with my smartphone because, it’s not only more convenient but also enjoyable (this activity kills time without you noticing it).

So here is my top 10 MOBA games you should never miss to play.

Right of the bat, we have a turn-based moba. Yes, you heard me right. This is not your typical moba wherein intense action happens almost simultaneously. This may be not fitted here in this list for “real-time strategy” type of game but this concept has its upside also. You can plan your attacks and strategy for up to 3 minutes and then all you have to do is watch how it goes. You can play AoH in 1v1 mode or in 2v2 mode. Another reason why this is 10th in my ranking is that you will have a hard time starting the game to play. The game sometimes seems forever to load. Good luck with that.

Simplicity is beauty. Solstice Arena is quite a modest and simple moba game with the action mainly focusing on heroes alone. This IOS exclusive game has a simple concept; kill the enemy hero. Unlike many other moba games wherein your hero will be accompanied by AI controlled soldiers or creeps, this game doesn’t have those assistance. You will be fighting your opponent’s hero alone and ultimately winning the game. Still, items and upgrades will be needed to turn the match in your favor. 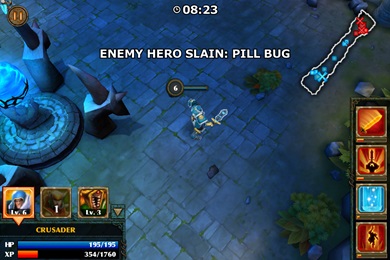 Legendary Heroes is a typical moba game that will truly test your multi-tasking skills. This game will let you take control of 3 heroes at a single game. While swapping between 3 heroes at a time is not that easy, you should also be advancing your forces to destroy opponent’s structures. Of course, early levelling up would be the best tip for this game. Another good thing about this game is that AI controlled enemy heroes are not that difficult to slay. Just be cautious where your “uncontrolled” hero goes.

If you’re tired of Dota themed mobas, and you’re a fan of space shooters, then Pocket fleet may best suit your taste. Pocket Fleet is a space-themed shooter wherein you control relatively small ship against other small ships and their mother shipyard. The concept of the game may be as simple as it sounds but this moba can lead you multiple hours of game play. This is technically a space dog fight so you better be quick at dodging enemy missiles and shooting those enemy ships before they dominate you. 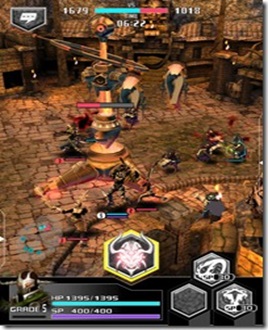 Demon Tribe is a combination of real-time moba action gameplay with card collecting elements. At first, this game can be confusing to play but the tutorial will clear things up. You don’t just defend your home base and attack enemy’s base using your heroes but instead, you also have to summon demons to fight for you which is quite helpful. If you’re up for a moba game where you also have to collect and upgrade your deck of cards of demons, then this game is for you. 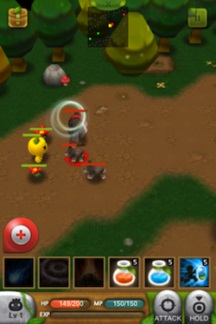 Just a few minutes of playing the game, it got me hooked, and I said to myself, Plants vs Zombies meets Dota! The simplicity of the game in terms of concept, gameplay and graphics may all be the reason why this game is so addicting. You choose your “plant” heroes from a simple knight plant hero to gigantic plant hero and charge towards the enemy base. This game is so simple to learn and master but yet, the level of the difficulty of the game increases every time you advance a level even though you think your hero is unstoppable. 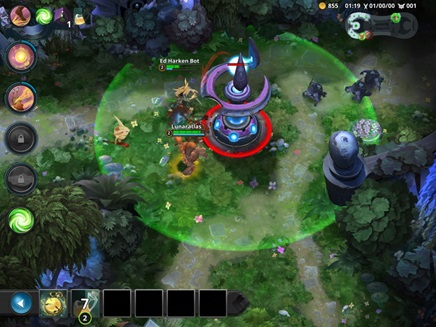 This IOS exclusive moba game is probably best played on an Ipad. Not that you’ll enjoy it more an a bigger screen but this game also needs bigger battery juice. Playing this moba game takes longer than a 30 minute session. What this means is that this moba game isn’t really meant for quick pick and play sessions. Just like many moba games, the theme of the game is to customize your hero to be a perfect killing machine in the arena. This can be done not just by simply farming throughout the game but team play is also necessary. This game is also exceptional in terms of online play. The quality of the graphics of this game doesn’t compromise the smoothness of the gameplay.

This moba game is the closest you can get to playing League of Legends on the PC. This is one of the best moba game you can play on Android platform. Intense 2v2 action is assured to be experienced when playing this moba game. However, there are also downsides in this game yet to be improved like this can only by played only up to 2v2 format and limited number of heroes. But graphic and audio quality wise, this game is undoubtedly worth playing and killing your time. So call up a friend and time for some multiplayer co-op skirmish moba action!

In terms of graphics quality and gameplay, Vainglory game stands out in the crowd. This game has exceptional graphics especially on the latest IOS devices. The gameplay is excellent, and even if most of the maps have only a single lane moba arena, this game is still very addicting to play with. You get to choose from the 10 heroes available on the game in which each of them has skill very different from one another yet the game is very well balanced. 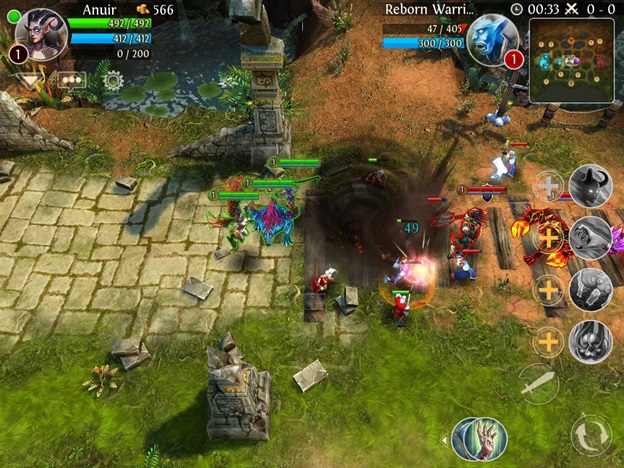 If you want the best experience of playing a moba game, here it is. Heroes of Order and Chaos excels in all aspects of a moba game in terms of graphics, gameplay, audio and the balance of heroes and spells and items. This game can be played from 1v1 to 5v5 online. Team play is crucial when playing 5 on 5 but like DOTA, mastery of each of the heroes’ abilities and skills is the core of winning for the team. In this game, you get to choose among 44 heroes each of which have different skills and abilities that complement each other maintaining the game’s balance.

These heroes also can be classified to 4 classes namely; Guardian, Fighter, Mage, and Support. Choosing a hero in the beginning of the game is important because you should play a hero depending on its role, whether you’re comfortable in playing as a support hero or as a fighter hero. Choosing the correct items for a specific hero is also necessary so that the items you obtained or bought complement and enhance your hero.

So there it is. My personal top 10 mobile moba games. I hope you enjoyed my ranking and review of these games. So needless to say, you might have some objections and doubts on my review. But keep in mind, the quality of how good a moba game is depends on your personal preference and how you enjoy them. So if you have time, download these games and push your heroes and forces towards victory!